Hip Dysplasia is the medical term for the instability and free movement of the hip joint.  This is caused by the abnormal development of the femoral joint in which the iliac bone is fixed, allowing the femur to slip from the joint.

Thousands of children are affected annually by this anomaly, in which the severity varies from a slight instability to a complete dislocation of the hip. Approximately 1 out of 20 newborn babies suffer from one form of the instability of the hip, and 2 – 3 children in 1000 will need treatment. 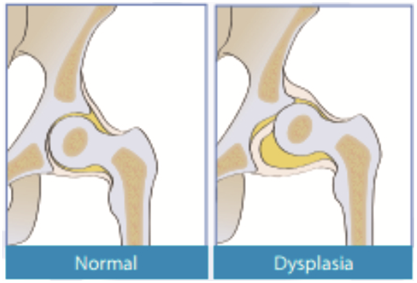 Hip Dysplasia is not a birth defect because nothing is ”missing”. This instability appears as a result of the hormones that are produced while giving birth, which causes the relaxation of the ligaments. The child`s position during birth can also cause the dislocation. Happily, most hip dysplasia cases resolve naturally if specific steps are taking to alleviate the dysplasia.

In order to prevent hip dysplasia, but also in order to correct it, babywearing in an ergonomic carrier is recommended, as it provides proper structure to keep babies` legs in an “M” position, in which knees are higher than the bottom so that the pressure is not on the baby`s spine.  This positioning keeps a healthy physiological spine curve.

Babywearing in this ergonomic position stimulates the normal growth of the hip and prevents hip dysplasia, which can be caused by incorrect and unergonomic babywearing.

Moreover, children who are treated for congenitally dislocated hips, benefit greatly from corrective orthosis with thighs apart and are recommended to be worn in a wrap or other carriers, with a wide supportive base supporting the thighs.

Wearing baby in the right position combats congenital hip subluxation and sprains, especially of girls, by allowing the child to stay in “M” position, in which the top of the femur is covered more than 2/3 of the acetabulum of the hip bone.

Research in the 1950`s showed the beneficial effects of babywearing for prevention and treatment of hip dysplasia. C Stuart Huston, MD, produced a film on this topic in 1954.

Babywearing outward facing can be deemed unsafe and unhealthy because it does not allow for proper support of the hips and spine.  While forward facing, the center of gravity is exterior oriented and the pressure is placed on the hips and the base of the spine. In the following photo, you can see the difference between a non-ergonomic carrier (left) and an ergonomic one (right)

The International Institute of Hip Dysplasia recognizes ISARA carriers and wraps to be ergonomic and stimulating the normal healthy growth of the hip and prevents hip dysplasia.

ISARA favors the normal growth of the physiological curves of the spine  ( cervical lordosis , dorsal kyphosis and lumbar lordosis ) and keeps baby’s legs bent and spread apart, following the position recommended for the prevention and treatment of hip dysplasia.

ISARA is listed as a Hip-Healthy product on The International Hip Dysplasia Institute Official Page.